I had a hard time sleeping (since I AM usually awake all night), but finally was able to get a few hours in. Promptly at noon, the town car was out front waiting to bring us to the Cruise Maryland Terminal!

Once at the terminal, check in was a breeze. The only line we encountered was at security. There wasn’t even a health questionaire. An embarkation photo, a security photo, and a bing later, and we were on our way to Lido. By 12:30 we had our DOD’s in hand and went off in search of lunch.

We headed to the Pride’s recently installed Serenity area (Deck 9, aft) and were very impressed. As I mentioned, we had previously sailed on Fantasy Class ships, and this was MUCH better. There was only one hot tub, but the pool, thebar, the seating areas, the hammocks and the clam-shell chairs more than made up for it. Cabins were to be ready about 2pm, so we just relaxed. The 18+ rule did not seem to be enforced. At first, I figured it was because the cabins hadn’t been cleared yet, but there were under-18’s there later in the day, too. (I should note – this was the only day in which this was an issue.) 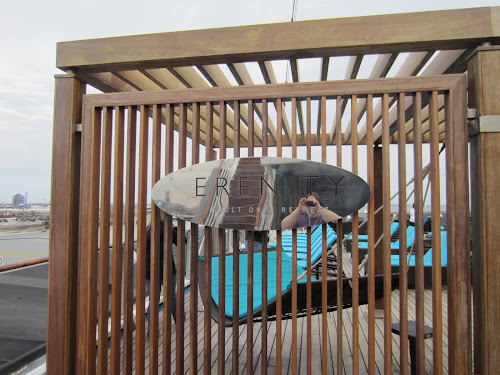 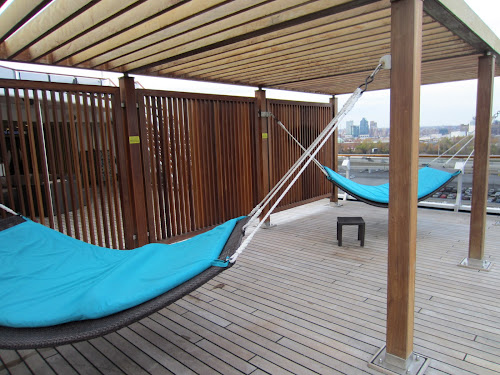 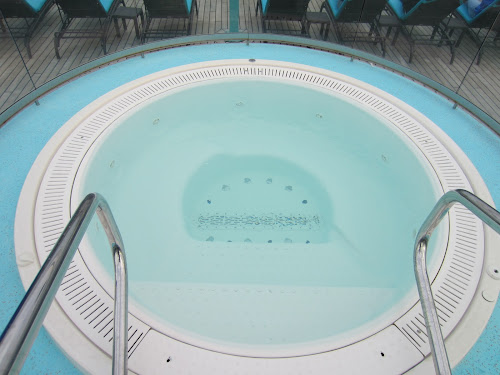 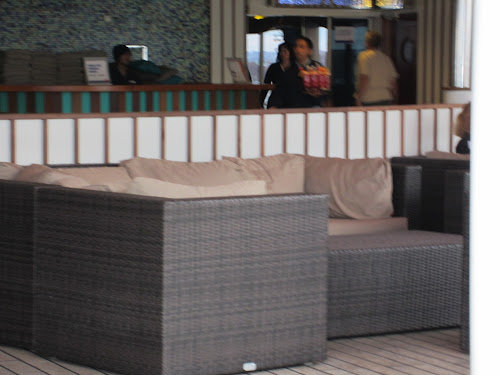 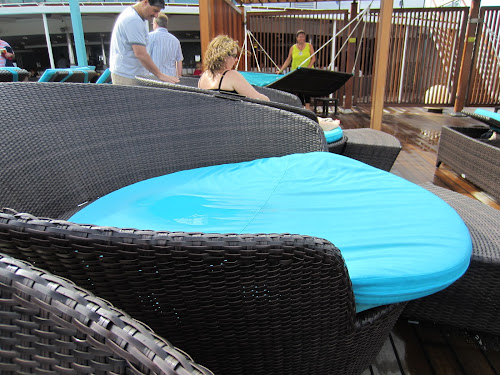 A few minutes before 2 we made our way closer to our cabin. We had originally booked 5236, a "bowling ball" balcony, but in June, while checking for price drops, I saw that 7258 was available for only a little bit more than what we’d booked at. Score!! Our first balcony cabin is SPECTACULAR!! Three times as long as a normal extended, for the same price! I cannot stress enough how much I recommend this cabin. There are 2 upright chairs, 2 lounge chairs, and a table already provided. The bathroom layout is much better, there’s an actual counter and shelves for toiletries. The in-room refrigerator and added space are a big step up. 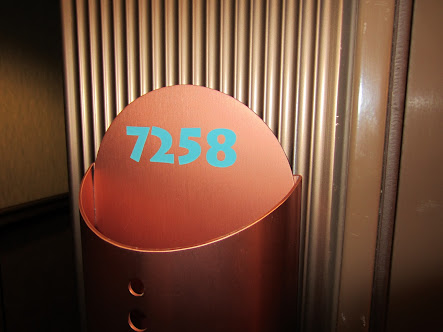 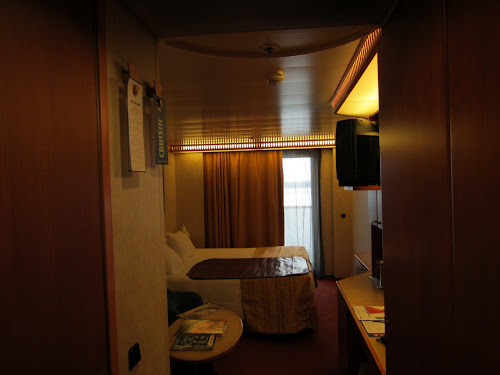 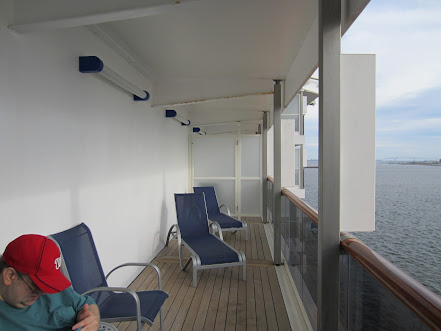 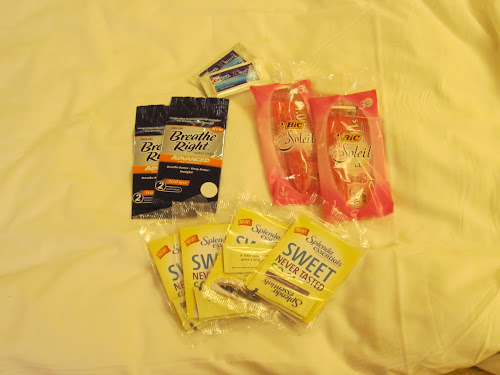 and a "panoramic" from the balcony:

We booked David’s for the first night, a 9 o’clock reservation. Once on board and realizing I wouldn’t be able to stay awake for the whole 2-hour experience, we stopped up there to see if we could go earlier. We were able to change our reservation to 8 instead. 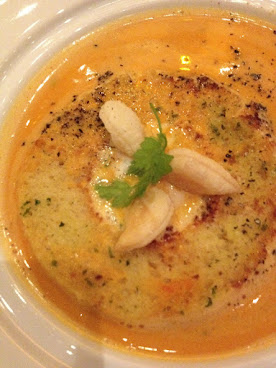 A Caesar salad (no pic, sorry) that was hand-made at our table. 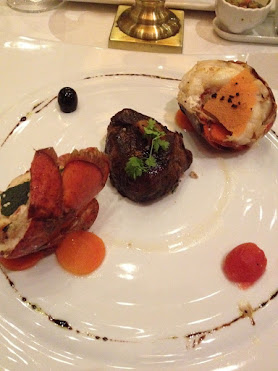 and the chocolate sampler, which he promptly ate before I could get pictures without bites in them (a feat he repeated for much of the week.) 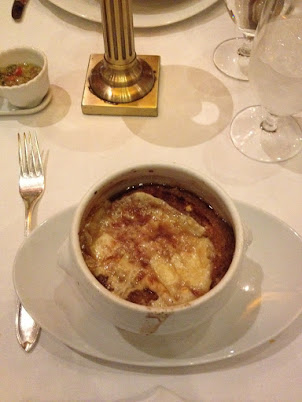 The 14oz Broiled New York Strip with the mushroom sauce 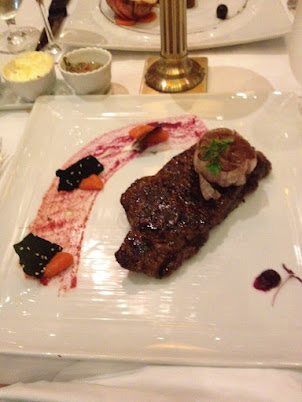 And a slice of cheesecake that was almost as big as my head. (Seriously. I could barely eat half.)

After that, we walked around the ship and went to bed, after being greeted by this dude: 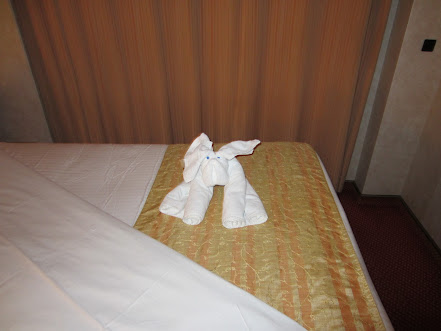 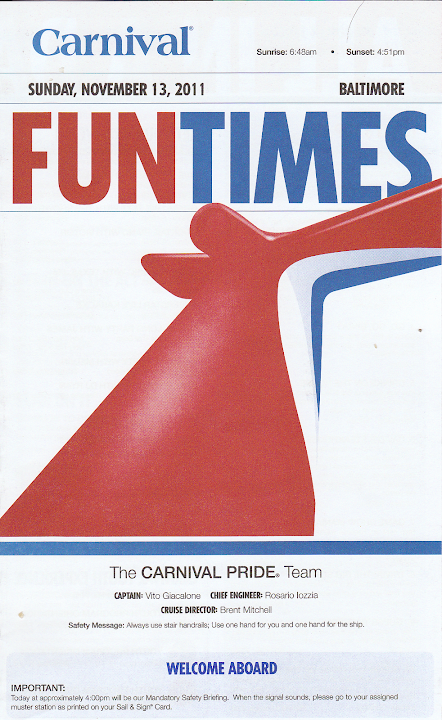 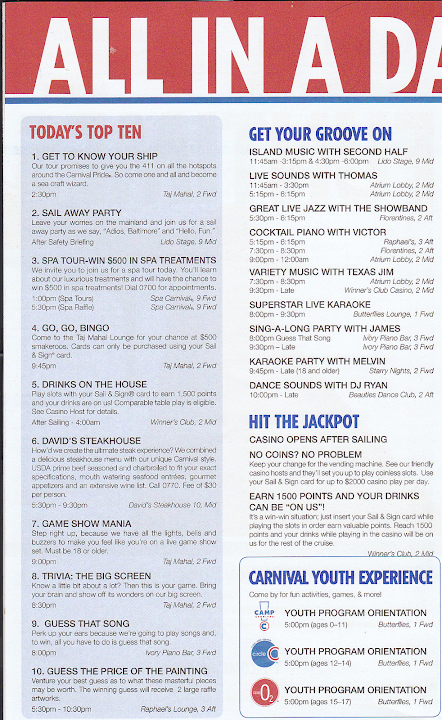 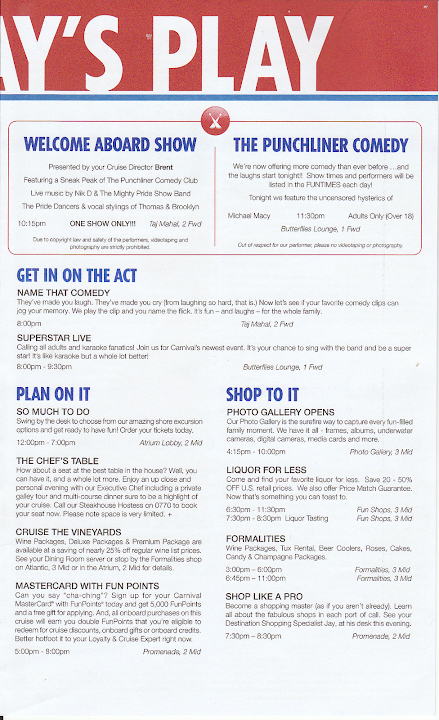 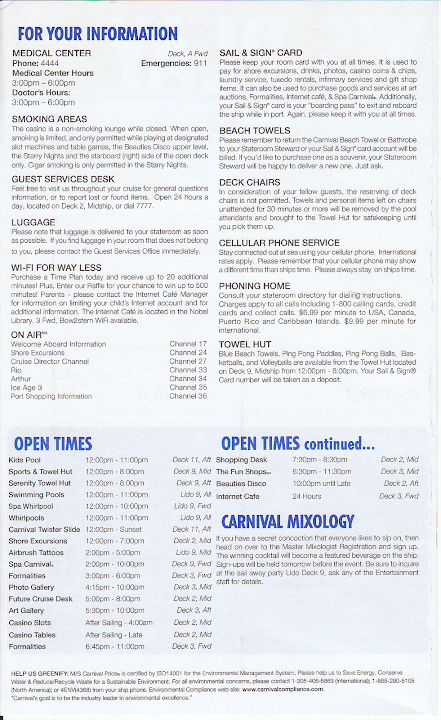 Posted on November 27, 2011, in Cruise, Uncategorized. Bookmark the permalink. Leave a comment.